Josh Matthews, Co-Founder and Managing Partner at MASECO Private Wealth, recently had the opportunity to meet with legendary investor and New York Times bestselling author Howard Marks, who was in London for an Oaktree investor conference. Howard is the Co-Founder and Chairman of Oaktree Capital Management and is a renowned value investor who has been managing portfolios and imparting investment thoughts through his insightful memos for more than 30 years.  One of the funds in which some of our clients invest holds Oaktree Opportunities Fund XI which invests in distressed assets and provides financing to borrowers.

Below are some of Howard’s thoughts on various topics relevant to investors today.

Risk on or Risk off?

When discussing whether he is buying or selling today, Howard said: “I never answer that question, or at least not in the past five years.  Our funds never sell to raise cash for market timing purposes.  However, we become more defensive when we think markets are at extreme highs, and we become more aggressive when we think markets are at extreme lows.  We have done this on occasion and have generally been successful.  During my 50-year career I have only made a ‘Risk on, Risk off’ decision five times.”. The past few times Howard dramatically increased or reduced risk were, during the pandemic, the global financial crisis and at the height of tech boom.

Howard doesn’t believe markets are at extremes today and is less defensive today than 6-8 months ago: “At extreme highs and lows, the reasons for labelling the [stock market] level irrational are compelling, and the probability of being right is high.  I don’t believe we’re at such an extreme high today.”.

Howard does not believe in market timing and said: “If it’s cheap today, we buy it.  If it’s cheaper in 6 months, we buy more.  We can’t time markets or know when you are at the bottom until afterwards.  Waiting for the bottom is folly.”.

In order to be a good market timer, you need to be able to forecast the future, which very few people can accurately and consistently do.  In his memos, Howard has often quoted the famous Canadian/American economist and bestselling author John Kenneth Galbraith, who once said: “There are two kinds of forecasters: those who don’t know, and those who don’t know they don’t know.”

A disciplined rebalancing strategy also helps investors forego the need to market time and benefits investors during volatile markets by allowing them to buy ‘more’ shares/units in an investment near the lows and requires investors to sell ‘some’ shares/units near the highs.

In his recent memo, he wrote: “We have to go back 22 years – to before the bursting of the tech-media-telecom bubble in 2000 – to see what I consider a real bull market and the ending of the resultant bear market.  A bull market shouldn’t be defined as a percentage price movement.  For me, it’s best described by what it feels like, the psychology behind it, and the behaviour that psychology leads to.  You may ask, “What about the market gains that preceded the Global Financial Crisis of 2008-09 and the pandemic-related collapse of 2020?”  In my view, in both cases, the preceding appreciation was gradual, not parabolic; it wasn’t driven by overheated psychology; and it didn’t take stock prices to crazy heights. Moreover, high stock prices weren’t the cause of either crisis.”

Last week he repeated that “inflation is mysterious.  Nobody really knows how to create or tame inflation and there is not much we can do about it.”.

One of Howard’s favourite quotations over the years has been from Mark Twain, who said, “History doesn’t repeat itself, but it does rhyme.”   Howard believes “it’s a big mistake to expect history to repeat exactly.  The events of investment history don’t repeat, but familiar themes do recur, especially behavioural themes.  It’s these that I study.”.

Another one of Howard’s favourite John Kenneth Galbraith quotations is: “The only function of economic forecasting is to make astrology look respectable.”  Howard, too, does not believe in economic forecasting and doesn’t believe anyone can consistently accurately predict the future: “The only thing we can predict about cycles is their inevitability.”.  In his memo titled ‘You can’t predict. You can Prepare’ he discusses the folly of predictions in great detail.

Last week he went on to say, “cycles exist and there will always be recessions.  The question is when they will occur and how bad they will be – no one knows.”.’  When asked about what to do about recessions, he said: “Not much” and that Oaktree is making only some adjustments on the margin to their portfolios.

Once again, a disciplined rebalancing strategy should help in investors who believe in cycles.

Howard has written many times about Asymmetric risk: “To succeed at any activity involving the pursuit of gain, we have to be able to withstand the possibility of loss. A goal of avoiding all losses can render success unachievable almost as readily as can the occurrence of too many losses.  The goal to investing is asymmetry: to expose yourself to return in a way that doesn’t expose you commensurately to risk, and to participate in gains when the market rises to a greater extent than you participate in losses when it falls. But that doesn’t mean the avoidance of all losses is a reasonable objective.”.

Last week he talked about how investors should try to achieve:

At MASECO we believe clients should invest in diversified portfolios, which can help reduce risk and cushion falls in your portfolio during difficult times, such as the first half of 2022. If you can limit the downside in tough times and participate in the upside during good times, this leads to asymmetric risk.  MASECO’s current overweight allocation to value stocks, inflation protected securities and short duration high quality bonds is having the desired effect this year and portfolios have fallen less than the composite benchmarks made up of the broad-based equity and bond indices.

Some other insights from Howard are that he typically buys assets that are worth less than his estimate of intrinsic value (the discounted value of the assets future cash flow) and then is patient and waits for the asset to increase in value and reach their intrinsic value.  ‘Value investors aim to come up with a security’s current intrinsic value and buy when the price is lower, and growth investors try to find securities whose value will increase rapidly in the future…The emphasis in value investing is on tangible factors like hard assets and cash flows…Adherence to value investing permits investors to avoid conjecture about the future and that growth investing consists only of conjecture about the future…In general, the upside potential for being right about growth is more dramatic, and the upside potential for being right about value is more consistent…In my book, consistency trumps drama…Trying to buy below [intrinsic] value isn’t infallible, but it’s the best chance we have…Buying below [intrinsic] value is the most dependable route to profit. Paying above [intrinsic] value rarely works out as well.”.

As we know from the work done by Nobel Laureates Eugene Fama and Ken French, value stocks usually outperform growth stocks and that investing in value stocks tends to also lower downside risks because investors are already buying stocks that are of a lower price than growth stocks.

Howard is a big believer that investor psychology affects markets and asset prices: “The relationship between price and value is influenced by psychology.  The discipline that is most important is not accounting or economics, but psychology…The psychology of the investing herd moves in a regular, pendulum-like pattern – from optimism to pessimism…Investing is a popularity contest, and the most dangerous thing is to buy something at the peak of its popularity…The safest and most potentially profitable thing is to buy something when no one likes it.  Given time, its popularity, and thus its price, can only go one way: up…Why do mistakes occur?  Because investing is an action undertaken by human beings, most of whom are at the mercy of their psyches and emotions…Psychological forces are some of the most interesting sources of investment error.”.

In a 2018 interview with Morningstar, Howard said: “When others are afraid, you needn’t be; when others are unafraid, you’d better be. At any given point, the market is driven by fear or greed.”.

Howard’s comments (and thoughts over the years) are extremely insightful and I would encourage interested investors to subscribe to his very popular memos and podcast.  Howard and his memos have provided great insight to both institutional and retail investors over the years and MASECO shares many of his views on value investing, market timing, investor psychology and other important investment topics.  Look out for more interesting quotation from Howard in future MASECO blogs and whitepapers. 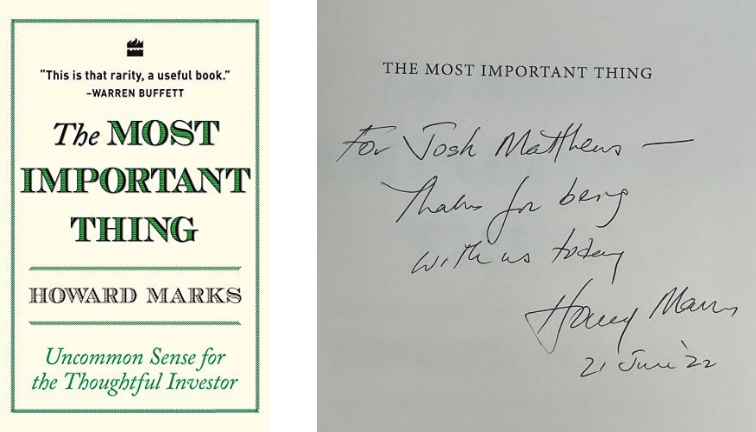